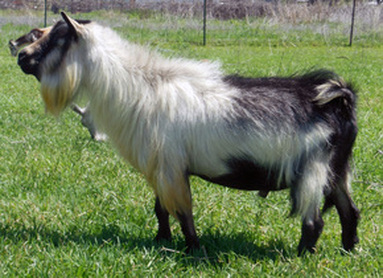 Thomas Jefferson (TJ) comes to us from Enchanted Hill Farm in VA.  We don't often buy goats, especially bucks, we knew TJ was one we had to have.  He's a beautiful boy, standing on great feet and legs, and he's a cou blanc.  We couldn't resist.  Several of TJ's daughters have freshened multiple times with beautiful udders.

Extended Pedigree
For Some odd Reason the +S will not show up on the pedigree generator
So, Anything that just reads "S" after a buck is indeed a "+S"