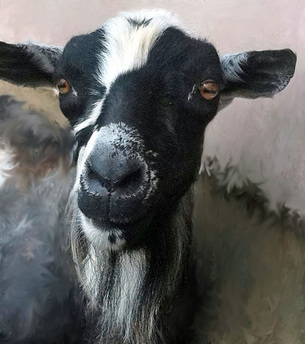 Special thanks to Sue Brennan of Irish Whisper for giving us our precious Harry.  He spent his entire life here at Flat Rock where he certainly made an impact with his daughters and sons.  Harry was a very correct buck and threw beautiful kids. Harry is a combination of two of what I consider the most influential bloodlines in the breed, that of Stonewall Raising Arizona on his dams side and Twin Creeks Luck of the Draw on his sires. He is extremely consistent, his kids are carbon copies of each other, and that is something I look for in a buck. He mostly leaves my udders alone which I also like. He adds some teat size to some and medial to others. He leaves the rear udders alone which I am already very happy with. Orifices are very large. His daughters freshen easily. I have never, not once, had a C-section on a Harry daughter. Likewise Harry kids birth easily, they are very angular and dairy, and remind me strongly of my Gem kids. The icing on the cake is their temperament. Harry kids are born like bottle babies. People come to my house and assume I bottle feed everything. Nope. It's just Harry and it breeds true. His grandkids are the same way.
He is sorely missed.

Extended Pedigree
For Some odd Reason the +S will not show up on the pedigree generator
So, Anything that reads "/S" after a buck is indeed a "+S", also "//S" = "++S"